Cinephiles, film fans, critics and academics have all locked horns, run debates and published on the question of what are the greatest films? Lists have been compiled by some of the most respected publications and the most learned, whilst the rest of us pour over these lists and either nod in agreement or guffaw in disgust. Case in point – some agreed wholeheartedly and others were shocked when Sight And Sound removed Citizen Kane (1941) from its reign at the top of the list and gave Vertigo (1958) the number one spot. There was then and still is plenty of discussion around such decisions and that’s as it should be.

However, when it comes to the question, ‘what films do you turn to for comfort?’, there are no incorrect answers. It’s totally subjective and that, too, is as it should be. We turn to some films that are particularly special to us, especially when we need that boost to our spirits or simply something to make us feel good inside or even an escape to somewhere else.

There are a few who condemn this film as the exploitive death knell of the classic Universal monster era and such criticism is understandable. Yet in fairness, any such exploitation was happening before the comedic duo crossed paths with our favourite monsters, and the shine and quality of the early 30s period was long gone. But it’s still a film that’s filled with fun and for many, including myself, it’s one of the first experiences of a wonderful partnership that stands the test of time.

As a child in the late 1970s in Australia, video was rare and most films appeared on television once a year. As a result, some films were a major event! When Abbott and Costello Meet Frankenstein was scheduled (usually a midday treat on a weekend), neighbourhoods were cleared out as kids raced home to watch.

The story revolves around two hapless baggage handlers Chick Young (Bud Abbott) and Wilbur Grey (Lou Costello) who get all caught up in a mad monster mystery, crossing paths with the tormented Lawrence Talbot (Lon Chaney Jnr), who is trying to finally destroy the plans of Count Dracula (Bela Lugosi) to revive the Frankenstein Monster (Glenn Strange). There are plenty of scares and Bud and Lou pull off their routines with perfect timing and slick delivery. For me, some of the most effective moments are Bud and Lou’s scenes with Chaney, leaving the audience terrified whilst we are laughing.

The combination of horror and comedy made the film a smash hit at the time and helped not only to revive the duo’s slightly slipping popularity but also gave them a new template to work with. For many fans of Abbott and Costello, their meeting with the Universal monsters remains their favourite and the one that is best remembered. Those cold winter afternoons warm up for me whenever I slip Abbott And Costello Meet Frankenstein into the DVD player and the magic of childhood returns.

The mightiest of monster movies – with the one true king being a 50 foot ape rampaging through jungles (both literal and urban ones) whilst holding onto a gorgeous girl screaming for her life. Does pure escapism get any better?

Merian C. Cooper’s and Ernest B. Schoedsack’s incredible fantasy-action tale utilised Willis O’Brien’s then ground-breaking (and incredibly painstaking) stop-motion animation technique that still thrills. It was a gamble by RKO, spending nearly $700,000 during the Depression and long after the studio closed down, it’s still reaping the rewards. It’s got everything and as Carl Denham (Robert Armstrong) declares to Ann Darrow (Fay Wray) – ‘it’s money and adventure and fame…it’s the thrill of a lifetime!”. And there certainly is plenty of adventure, thrills and lots more besides. From the moment Kong first appears to his final fall from the Empire State Building, King Kong does not disappoint. The battle between Kong and the T-Rex is like watching a prize-fight (which was apparently inspired by the film-makers’ love of boxing and wrestling) and Kong rampaging through New York is pure mayhem.

Driven by Max Steiner’s superb score, King Kong deserves its place in cinema history but it also holds a special place in my heart. Whenever I watch it, before long I find myself transported to Skull Island to watch Kong in his kingdom, lament his capture and mourn his demise. It truly is a silver screen ‘thrill of a lifetime’ and a classic I turn to for a comforting dose of escapist fun. 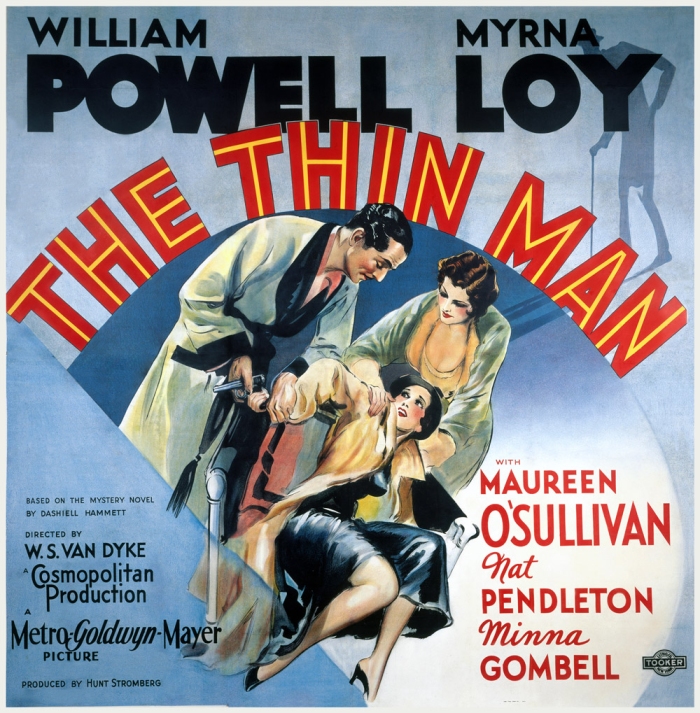 Not many films have that perfect combination of mystery, comedy and a little dash of screwball with a screen couple radiating incredible chemistry like The Thin Man (1934). It was a ground-breaking film which not only gave birth to one of the most successful and loved series of the classic era but would see Myrna Loy break the typecast roles she had been playing. Her comedic chops came to the fore, melding perfectly with William Powell, whose wit and ad-libbed moments brought a new sophistication to comedy. The sheer magic of the two on screen has a beautiful naturalness without any confection and that undoubtedly was the key reason for the film’s (and the subsequent series) success.

The Thin Man, based on the novel by Dashiell Hammett, is far more than a mystery. Neither was the well-paced film simply a vehicle for Powell and Loy. What emerged was something special that was not formulaic but formed from the natural chemistry of the two stars from a well-crafted script and the intelligent foresight of director W. S Van Dyke to let magic happen and ‘catch it’ when it happened. But that did mean that the shooting had to be tight and the cast had to know their dialogue.

As much as I love the series, the first film is particularly magic for me. The feel of spontaneity, the playfulness and the witty banter makes for a fun filled 93 minutes. With Powell and Loy, there’s romance without the corn and sex without the sleaze. No wonder it was a huge hit on its’ release in 1934 – it’s still a huge hit for me and one I turn to often. Like Nick Charles with a mixer, it’s the perfect comfort cocktail. And boy, is Myrna Loy gorgeous!

Something tell me this film is on most people’s list and I imagine that’s not much of a surprise. The Wizard Of Oz is that trip over the rainbow that is clearly for ‘the young and the young at heart’. It gets the full MGM treatment, which means the best production quality, with a talented cast and of course some of the most famous musical numbers in cinema history.

For me, The Wizard Of Oz is not only a comfort classic but also holds a strong personal memory. As a child in Australia, colour television did not come to Australia until 1975. When my father brought home a colour television in 1976, the first film we watched as a family that evening was The Wizard Of Oz. That moment when sepia changes to bright Technicolor was a true moment of magic and no matter how many times I watch it, I still get teary.

I’m not particularly a fan of the musical but The Wizard Of Oz has a special place in my heart, and it is a film which I will often turn to for an indulgence.

A murder trial may seem like the strangest subject for a comfort classic but Billy Wilder’s superb court-room drama is the perfect film to lose oneself in. Tight and taut, with the superb touch of humour that Wilder knew how to add without ruining the tension of the story, Witness For The Prosecution perhaps sets the bar for the classic shocking plot twist.

The film showcases incredible talent not only in its key stars but in the incredible supporting cast, mainly from a range of quality British actors and actresses. For all the brilliance that Tyrone Power and Marlene Dietrich bring to their performances, the film’s true star is Charles Laughton who is superb as Sir Wilfrid Robarts. The sharp wit, acerbic manner and dazzling mind of the highly respected yet unwell barrister keeps the audience hooked into the story without chance of escape.

I’ve watched the film countless times with a complete and full awareness of how the plot will unfold and what the now famous twist will be at the climax of the film. Yet I am always riveted by the story and the beautiful craftsmanship that goes into shaping the film. The energy in the courtroom never dissipates and the flashbacks add depth and value to the story. There’s no fat to be trimmed and each moment in the film is an important layering to character development as well.

It’s an impeccable film and one which I thoroughly enjoy. More than a favourite, it’s like an old friend whose conversation I always find sanctuary in. Witness For The Prosecution, like that old friend, never fails to disappoint.

This entry is part of the Classic Movie Bloggers Association Spring Blogathon: Classics For Comfort. It’s been a pleasure to take part and a special thank you to the CMBA for running a blogathon that is much needed at this time! Click on the link to discover what other bloggers have revealed about their comfort classics.