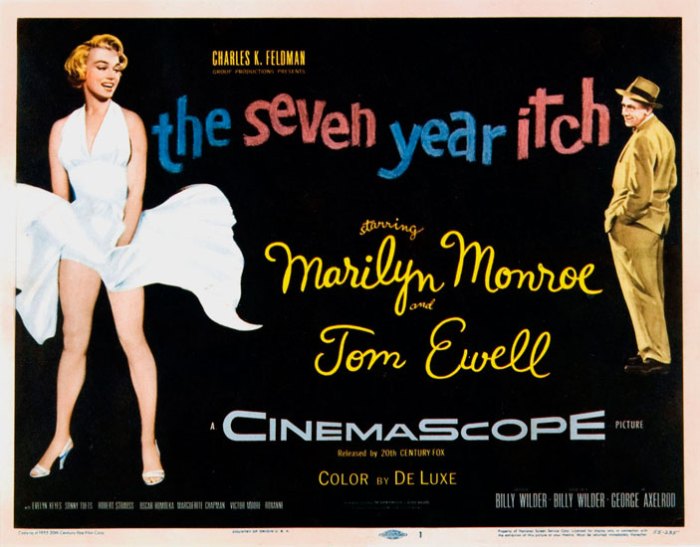 When it’s hot like this – you know what I do? I keep my undies in the icebox – The Girl (Marilyn Monroe)

The seasons hold powerful symbolism in a number of ways and cinema audiences have made those connections for decades. There is a romanticism about Spring (the blooming of love, rebirth, discovery), a bittersweet emotion is often connected to Autumn and Winter can represent far darker elements whilst alternatively evoking memories of cosy fires and (at least in the northern hemisphere) scenes of Christmas.

But Summer is a whole different thing. Hot summers evoke hot passions, the full flowering of life and living life to the fullest before everything turns back to the long, cold winter. Despite a celebration of summer generally being linked to youth and the young, that doesn’t mean that the more mature don’t share the same desires. Just as the young make discoveries and want to experience the world, those somewhat past the initial full-bloom of youth have just as much a desire to party. They also seek out to re-spark the excitement that was once there and perhaps lament decisions which have seen them in marriages that have left them stilted.

The concept of the ‘seven-year itch’ has become cliched in an age where divorce, separation, multiple partners and affairs are de rigueur. Indeed, the concept of marriage is one which is not a permanent state, nor does it prevent people from seeking partners or sexual excitement from outside the marriage. However, the ‘seven-year itch’ was a new, psychological concept in the 1950s and at a time when the sex comedy became an institution in film for a more hip and sophisticated audience.

As a result, Billy Wilder’s The Seven Year Itch (1955) sought to look at the phenomenon. Tom Ewell plays Richard Sherman, a middle-aged executive from Manhattan, who lives a straight, vanilla life. He begins to reminisce about his past and the possibilities and opportunities he left behind, particularly with those of the opposite sex, and the obvious mid-life crisis comes into play. But what also emerges are his own insecurities and worries, and as the audience will discover, his imagination runs rampant and we are left wondering how much of what we see is reality or Richard’s fantasy.

With the arrival of summer, Richard sees off his wife Helen (Evelyn Keyes) and son Ricky (Butch Bernard) as they go on vacation to Maine. It’s a hot, sultry summer, which of course is suggestive of the heat that Richard will begin to feel. Remaining at the publishing company he works for, the climate of sexuality is constantly hinted at; such as the title of Little Women being changed to ‘The Secrets Of A Girl’s Dormitory’, complete with highly suggestive cover. Or when he goes to a vegetarian restaurant (to watch his health) and the waitress (Doro Merande) asks for donations for the cause of ‘nudism’:

Waitress: Nudism is such a worthy cause. We must bring the message to the people. We must teach them to unmask their poor suffocating bodies and let them breathe again.

Returning home to an empty house, Richard has also been immersed in a manuscript – “Man and the Unconscious” by psychiatrist Dr. Ludwig Brubaker (Oskar Homolka). It is this book which drives his imagination into over-drive, as well as his mid-life crisis, and he begins to dream up all manner of scenarios. (Later, the famous beach scene from Here To Eternityis hilariously satirised, with Richard romping with his wife’s best friend Elaine). But Richard is also convinced that he is falling for the seven-year itch, where all married men are tempted to engage in extra-marital affairs after seven years of marriage. He also becomes convinced that he is irresistible to women and that women have been throwing themselves at him for years. All in his imagination of course. 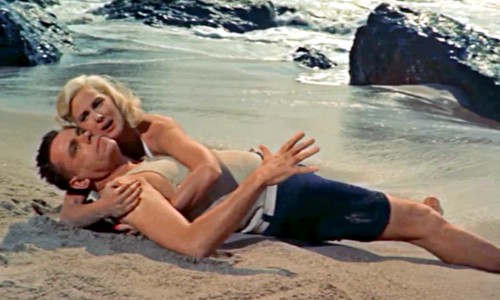 It’s at this point that he comes into contact with the new neighbour in the apartment building. Known as The Girl (Marilyn Monroe), this new neighbour is almost impossibly beautiful and oozes sexuality. Eventually inviting her in for a drink after a slight mishap, The Girl seems to be innocent in her sexiness and has no intention to seduce Richard. Yet he is under the misapprehension that he is definitely in with a chance, fuelled by his present condition and his misguided and deluded belief in his own personal attractiveness. Again, there’s plenty of fantasy as Richard’s mind invents all manner of seduction scenarios in which he conquers her. Richard drifts between fantasy and reality throughout the film.

Richard is inherently a good guy going through a personal crisis and no seduction occurs. However, the torment has a hold on him, and he seeks advice from Dr. Brubaker, whose book he has been reading. He’s even convinced that his wife and son will find about his imagined indiscretions and his guilty conscience is transferred onto his wife, whom Richard discovers has come into contact with a former beau (Sonny Tufts). But Richard is also becoming more paranoid that his innermost thoughts, as well as his sexual urges will be discovered by all, especially by his wife. His paranoia sees him imagining The Girl (working in a toothpaste commercial) broadcasting what he was been up to. It seems that Richard’s imagination never seems to let up.

Again, Richard drums up all manner of scenes between the two and he uses these as an excuse for revenge by inviting The Girl to dinner. To escape the hot summer evening, a movie in an air-conditioned theatre is suggested, going to see The Creature From The Black Lagoon. The interesting conversation they share is followed by one of the most iconic moments in film cinema history:

Contrary to popular belief, the scene filmed on location at Lexington Ave was not rendered useless by the noise of the crowd watching. The scene was re-shot on a sound stage and both scenes were used in the final cut.

In the end, the sexual tension is more in the mind of Richard though The Girl holds a definite affection for him. Richard eventually comes to his senses and realises that he has a problem with an over-active sexual imagination. Yet The Girl commends him for it:

The ending is a little sappy and to be expected for a sex comedy of the 1950s. Whilst it feels dated and even redundant, there are some funny moments, often emerging in the imagination of Richard Sherman. Tom Ewell is fantastic in the role and he brings forth a wry humour that makes it a fun, memorable performance. But if the film is particularly memorable, it is thanks to Marilyn Monroe whose characterisation of innocent sexuality works well in tandem with Ewell’s performance. There is an unfortunate truth the role plays up the ‘sexy dumb blonde’ persona that plagued Monroe’s career and the now iconic scene of her standing in the sexy white halter-neck dress above the grate, certainly fed that persona. 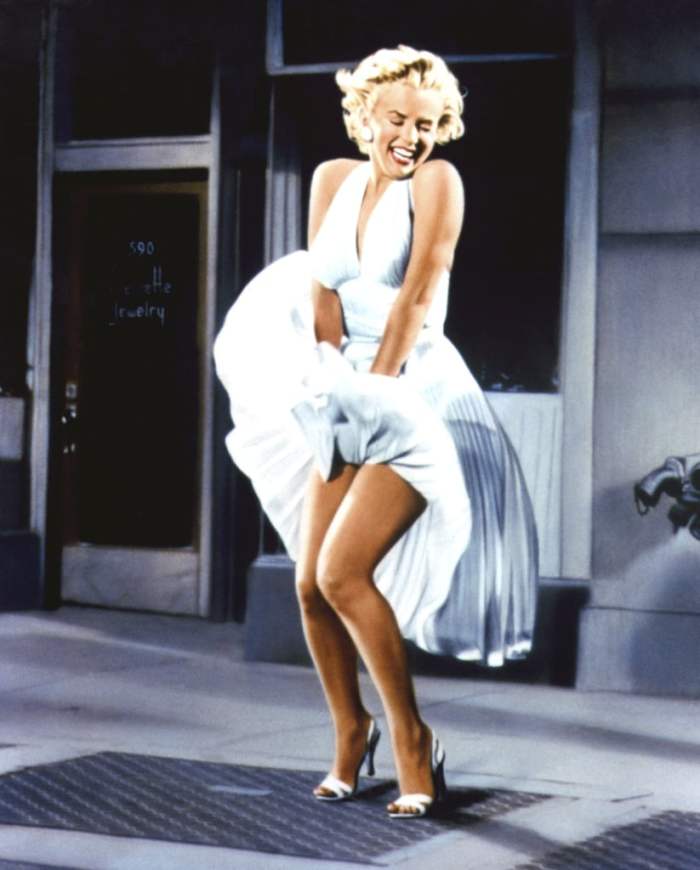 Drawn from the George Axelrod’s play, the film loses much of the impact of the stage version, due to the restrictions of the Code that was in place. Whilst The Seven Year Itch is still enjoyable, it becomes a light-hearted comedy with only some of the sizzle. Billy Wilder is one of the greatest directors, with a litany of great films across film noir and comedy that were not only ground-breaking but are templates for genius on film. The Seven Year Itch is not one of them, although it did well at the box-office on release and was generally well-received.

The film is perhaps best remembered because of Marilyn Monroe’s dominating sexual presence and the title which would become part of the lexicon of popular culture. In Cahiers du Cinema, Wilder would state that he was not happy with the film and would also describe it as a ‘nothing film’. Wilder had been commissioned by Fox to make the film and the restrictions in place would be too much for the director. Yet he still manages to add some beautiful touches to the film, specifically via the sexual urges of the main character in the presence of Monroe, as well as his talent for farce and cynicism. But as stunning as Monroe was on screen, Wilder found her exhausting to work with although it would pale in comparison to the difficulties, he would face with her a few short years later in Some Like It Hot.

The film certainly looks good, with Wilder using colour and Cinemascope to project the vivid imagination of Richard Sherman with great effect. There’s enough here to keep one entertained with a good dose of satire as well. Derek Adams in Time Out makes a valid point that what seemed ‘fresh and risqué in the ’50s, now appears a little obvious and over-plotted’. Wilder would have agreed with the sentiment.

For a film set during the heat of summer, there’s still some of the sizzle that one would expect in a sex comedy starring Marylin Monroe. Without the restrictions in place, and Wilder freer to pursue the original story, The Seven Year Itch may have been more of a scorcher.

This article is an entry into the Hotter N’Ell Blogathon kindly hosted by Movie Movie Blog Blog . Please click on the link to read other great entries!

B Noir Detour
Shades Of Noir

shifting the shape of popular culture

Love to the Max

I love my kids unconditionally. It's not hard.

I just might have something to say about that!

Super Veebs
Queen of the Lot

A blog about classic Hollywood and its stars

Formerly Fading, But Not Forgotten 🌸 Zoe Krainik Blogs about Old Hollywood and Genealogy

A continuation of moviemovieblogblog.wordpress.com...More of my thoughts on movies and pop culture

THE CLASSIC ERA FOR EVERY ERA

Celebrating Stories in Every Medium