It really doesn’t matter whether it’s the villain or the hero. Sometimes the villain is the most colorful. But I prefer a part where you don’t know what he is until the end – Glenn Ford

When I first saw the announcement of the ‘O Canada’ Blogathon, I found myself drawn to it – particularly in light of having visited the wonderful city of Montreal on two memorable occasions. Canada holds a special place in my heart and despite being a very long flight from Australia, there lies within the hope that I will visit there again. There is an incredible amount of talent that hails from Canada, many of which are claimed by their neighbour to the south, who have made a huge impact on classic film. One such talent comes in the form of legendary actor Glenn Ford.

Hailing from Sainte-Christine-d’Auvergne, Quebec, Ford’s family would leave their homeland to start a new life in California, U.S. Obviously, the move would prove fortuitous, with the young Ford attending Santa Monica High School and finding his way into theatre. A film career that began in the 1940s, Ford gave the screen great versatility, making his mark in film noir, comedy, Westerns and war dramas. My aim here is to look at the five performances which I feel are standouts in Ford’s long career. Whilst not expecting a consensus, the hope is that readers are inspired to watch the films listed here.

I imagine there are no surprises here. Gilda ranks high in the pantheon of classic film noir and features Rita Hayworth in her most iconic role as the quintessential femme fatale. But Ford is outstanding as Johnny Farrell, the gambler who despite loyalty to his boss, becomes deeply intertwined with his boss’s wife, Gilda. The powerful love-hate relationship between Farrell and Gilda burns with an intensity and a fury that still steams off the big screen. Ford emotes with a power that matches Hayworth’s smouldering sexuality, and betrays a man who has been burnt and burnt bad. 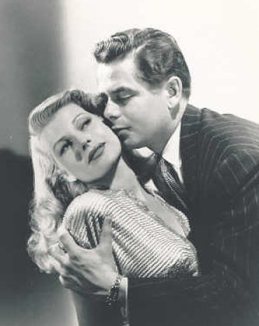 Trevor Johnston in ‘Time Out’ (2011) points out that Ford gives a performance highlighted by a ‘fight not to let bitterness get the better of decency’. It’s that tension that stretches to almost breaking point, leaving the audience constantly on edge as to what the protagonist will do. Christopher Machell in ‘Cinevue’ (2016) correctly states that ‘Gilda remains a brilliantly dark exploration of the consequences of love soured into loathing’. It achieves this superbly, not only due to the brilliant performance of Rita Hayworth and the layers she brings to the role but also thanks to Ford’s interpretation within the restrictions of the Code, giving a tour de force and an equally memorable turn as Johnny Farrell.

Directed by the legendary Fritz Lang, The Big Heat is on my list of top film noirs, not least because of Ford’s determined cop and the captivating Gloria Grahame. Unlike his on-screen romance with Rita Hayworth in Gilda, Ford doesn’t engage with the sultry Gloria Grahame. But the moments shared by the two are still powerful and engaging, particularly in the exciting finale.

Ford plays the straight, honest cop, who while investigating the death of a fellow cop, finds himself sliding into a deeper and darker world, as he battles criminals and corruption to seek the truth. There are victims along the way and his family will also be in the firing line. Ford shows a man so obsessed with his own objectives that his actions hurt those around him. The ‘heat’ he generates ironically hurts those he aims to protect. As Roger Ebert points out, The Big Heat ‘as deceptive and two-faced as anything Lang ever made, with its sunny domestic tranquility precariously separated from a world of violence’. To borrow Ebert’s phrasing, Ford is outstanding at playing ‘the perfectly acceptable honest cop’…appearing as ‘quiet and contained and implacable’ yet ‘capable of sudden violence’. Variety stated that Ford’s performance ‘is honest and packs much wallop’. Absolutely.

Not only is The Big Heat a must-see film noir classic, it’s also an opportunity to see Glenn Ford at his hard-boiled best. 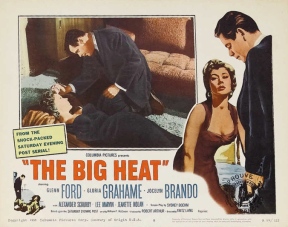 As a teacher, The Blackboard Jungle touches a raw nerve for me. Such a dark, cynical film depicting school students – and it’s the mid 1950s. Not only do we see belligerent and disrespectful students refusing the benefits of education but burnt-out and contemptuous teachers, violence between students and against teachers and the attempted rape of a teacher by a student, with a shocking and violent result. Into this mix, comes Richard Dadier (Glenn Ford) a new teacher at an inner-city Trades School. He combats the students, the teachers and the system in his attempt to educate his students.

Dadier’s desperation to reach his student is brilliantly portrayed by Ford, who exudes the desperation and controlled fear that a new teacher will feel coupled with a passion and controlled frustration that is also felt and shown through raw emotion. Dadier calls himself a ‘bumbler’ and the honesty and accuracy as he finds his way to reach his students feels real, as exemplified by Variety’s review, unlike the usual clichéd ‘teacher/saviour’ film.

Blackboard Jungle had an incredible impact during its’ time and still holds its’ audiences attention, as we engage with Dadier and the building tension and battle of wills, reaching its’ powerful climax.

Ford’s versatility saw him star in some fine Westerns and for my money, his performance, as ex-gunfighter George Temple is one of his best. The son of a famous quick-draw sheriff, George and his wife Dora (Jeanne Crain) start a new life with new names in a small town, living an unassuming life though with little respect or consideration from the townspeople. However, that situation is going to change, more a result of Temple’s doing than outside forces. Ford walks a psychological tightrope between the desire for a peaceful, mediocre and quiet life and the truth behind who he is.

Again, Ford brings an incredible sensitivity to the role of Temple, and the inner turmoil as his past taunts his yearning for peace is brilliantly played out as the story plays out. Ford also offers us an examination of human frailty, as he succumbs to ego and fatigue of being seen as a nobody, and finds himself doubly frustrated at doing so. Director Russell Rouse drives the story beyond the standard Western with a deeper psychological examination of the gunfighter but also a powerful aspect of the human condition – escaping past sins and seeking a new start. Ford is superb in this examination and the ending is as action-packed with drama and gunplay as any Western made. What truly makes Ford’s performance all the more powerful is his ability to draw the audience into the story through deeper understanding of our own humanity rather than the classic, though clichéd, concept of wanting the good guy to win.

Set in the Arizona Territory during the 1880s, Ford plays Ben Wade, the leader of a gang of robbers who hold up a stagecoach, witnessed by rancher Dan Evans (Van Heflin) and his sons. Eventually Wade is captured but the gang escapes and the town fears the retribution, which will follow. The decision is made to get Wade out of town and Dan steps forward to do so. What follows is a tense ride into a violent and surprising ending, which sets the film aside as a classic western. 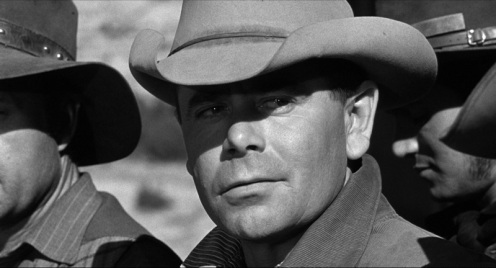 Ford brings depth and paradox to the role of Ben Wade, again displaying sensitivity to the role, which is initially unsympathetic. From the opening where we see a ruthless and violent man, it is hard for the audience to find any humanity in Wade. Yet his attempt to impress barmaid Emmy (Felecia Farr) reveals a gentleness and kindness that doesn’t equate with the violent man the audience sees earlier on. Again, Ford weaves the complexity of his character with balance and purpose, ably supported by a strong cast and well-written story. Critics praised Ford also recognized the importance of a role in what it had to offer, even if the part itself may appear unsympathetic or even villainous. This belief is more than evident in his forceful portrayal of Ben Wade.

Glenn Ford was not a matinee idol and came up through a time when realism and more complex characters became de rigueur. A deeper and more psychological approach to understanding human action and emotion allowed for greater expansion in story which more than matched the technological demands for wider screens. Ford was an actor who used time effectively to draw his characters out, allow audiences to absorb his reaction and believe in the story. He famously said:

‘If they try to rush me, I always say, I’ve only got one other speed and it’s slower’.

It certainly illustrates the talent of the consummate actor – making the difficult appear simple by claiming it’s actually simple. Glenn Ford is certainly a Hollywood icon, whose Canadian heritage should list him as a worthy candidate in the ‘O Canada’ Blogathon.