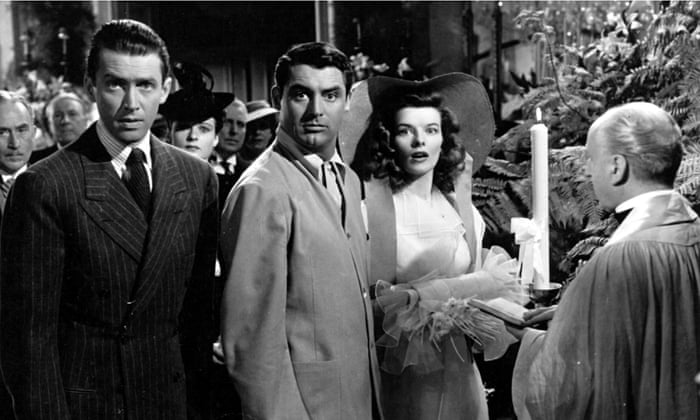 “The prettiest sight in this fine, pretty world is the privileged class enjoying its privileges.” Mike Connor

One of the great enjoyments of being a classic film fan is discovering films that you have either never seen or rediscovering films that had been previously dismissed or ignored (for one reason or another). Regardless of the reason, it means experiencing something new when finally viewed and something new is learned about the classic film era. For myself, it was a combination of both reasons when I finally watched The Philadelphia Story (1940). I was certainly not disappointed!

Released through MGM and directed by George Cukor, The Philadelphia Story (1940) is a classic screwball comedy. By the end of the 1930s, the market had seen a near surplus of screwball comedies of which are a number are easily forgotten. Yet The Philadelphia Story (1940) doesn’t fall to formula whilst still maintaining the deep, healthy irreverence in tone and style, which was a key convention of the genre. Additionally, it uses another oft-used plot device of the love triangle/re-married couple, which had in some form or another been a popular theme in films, particularly during the Production Code Era. 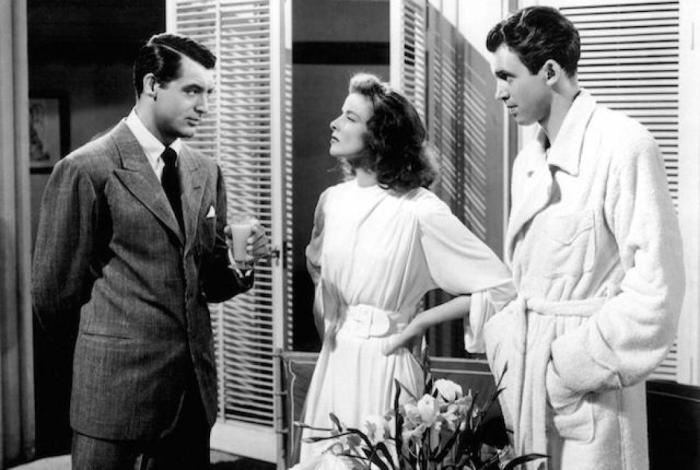 The aim of this review is not to outline the plot but to look at the film’s strengths and offer some points of admiration from this review that may prompt the reader to engage with the aforementioned joy of discovering or re-discovering classic films!

In brief, the story revolves around Tracy Lord (Katherine Hepburn) a wealthy previously divorced socialite who is about to re-marry Gordon Kittredge (John Howard), a rich individual who has made his fortune rather than inherited it. It is roughly two years since she divorced her first husband C. K. Dexter Haven (Cary Grant), which ended acrimoniously and their break-up is brilliantly depicted in the opening scene. It’s a testament to Cukor as director and the writer, Donald Ogden Stewart, who sum up the end of a marriage using slapstick humour, the loud silence of a couple not talking to each other and one of the best physical falls ever shown on film.

With the context established, the audience finds that Tracy and Gordon will marry the next day and as the activities of the rich make great fodder for the reporters, Spy Magazine sends two reports to cover the story – Mike Connor (Jimmy Stewart) and Liz Imbrie (Ruth Hussey). However, to get access to the Lord household, they need her former husband Dexter to assist.

To add a complication to matters, Dexter blackmails Tracy into allowing the reporters and him to stay as guests, by telling her that he will reveal the extra-marital affair her father had with a dancer. With her hands tied, Tracy has no choice but to let the stay for the wedding.

What follows is classic comedy, as Tracy will find herself torn between her former husband Dexter, her fiancé George and the reporter Mike. The lead-up to the wedding will see all characters caught up in all manner of situations with Tracy in particular asking questions of herself. The rest is for the reader to discover by watching the film!

So what makes The Philadelphia Story a bona fide classic?

The story initially sounds formulaic but it reaches far beyond what may be expected from such a plot. There’s a combination of factors, which allow for this to occur and the first port of call when discussing needs to be the script. Phillip Barry’s play (written for Hepburn) is perfectly transformed to the screen by Ogden Stewart, with pitch perfect pacing and dialogue that snaps with sharpness and sophistication. The script doesn’t just flow; it weaves. Ogden Stewart channels and interlocks moments of slapstick with pandemonium, romance and satire – and I have no doubt that the chaotic splendor of Paramount era Marx Bros has been thrown in for good measure. Note the brilliant rendition of Lydia The Tattooed Lady by Virginia Weidler as Dinah, Tracy’s younger teenaged sister. The dialogue fits the characters to a tee and Peter Bradshaw in The Guardian makes the astute point that ‘the fun and wit rise like champagne bubbles, but there is a deceptive strength in the writing and performances’. The ‘deceptive strength’ is ever-present in the moments we least expect, such as Dexter’s honest and devastating appraisal of Tracy delivered with a serrated sharpness that eviscerates Tracy with its’ truth. There’s nothing stilted or stiff in the dialogue and it never falls flat. Wendy Ide in The Times states that The Philadelphia Story possesses a ‘blue-chip screenplay…with fizz and spark’. It’s no mistake that Donald Ogden Stewart would win the Academy Award For Best Screenplay.

But the script doesn’t come alive without the sterling performances of the key players and the brilliance of the outstanding supporting cast. It’s well known and part of film lore that Hepburn needed the film to be a success after being declared ‘box-office poison’ and Holiday (1938) failing at the box office. Howard Hughes had helped with acquiring the rights to the play but Hepburn knew it would take exceptional talent to deliver the characters. Gable and Tracy were her desired actors but they were apparently tied up with other commitments. However, Cary Grant biographer Marc Eliot has stated that neither Gable nor Tracy wanted to work with her because of her status as box-office poison and Gable didn’t like the script at any rate. (Tracy had not met Hepburn at that point). Cary Grant’s previous work with Hepburn had chemistry and it culminated in their perfect partnership in The Philadelphia Story.

Grant brings to the role of Dexter his exceptional comedic timing, charm and wit, as well as an exceptional and uncanny ability to physically react to his opposite number with both and subtle and overt expression. Hepburn shows incredible range and conveys the haughtiness, strong will and arrogance of the character whilst shaping the character arc with depth and perfectly balancing this against Tracy’s frailty and vulnerability. She gives all of herself to the role and this was recognized by John Mosher in his review at the time in The New Yorker, pointing out the film was a triumph for Hepburn. The third primary character (and love interest), Mike Connor, is a win for Jimmy Stewart, who had just come off his success in Mr. Smith Goes To Washington (1939). Stewart is strong as the cynical reporter who regards the Lord household with contempt whilst falling for the statuesque Tracy. Stewart would not only win great reviews from critics such as Bosley Crowther but would also win the Academy Award for Best Actor. 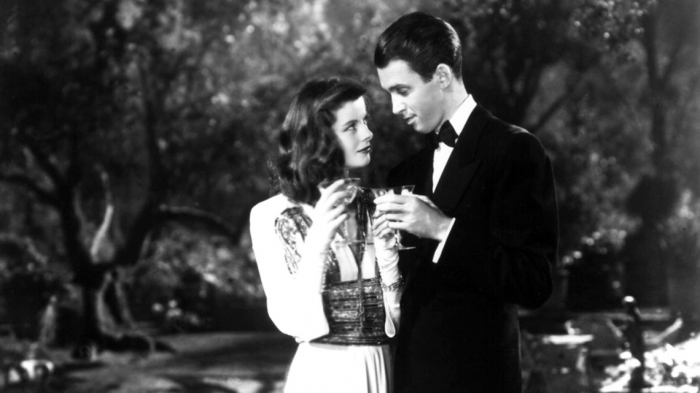 At the helm of the film’s direction, as already mentioned was one of MGM’s finest directors George Cukor, who had worked with Hepburn in four films. Cukor crafts a film, which leaves no dead air nor fills up time for the sake of it. There’s depth and meaning in moment and Cukor draws outstanding performances from the cast, and intertwining the complex relationships across a thematic climate of class war, truth to self and love. Demetrious Matheou describes the film as ‘an effervescent social satire that pokes fun at all sides in the class war. It’s wickedly witty, gloriously romantic, whip-smart and complex, even verging on the unsavory at times – all in all, something of a complete entertainment’. If so, it’s in great part due to the sensitivities of Cukor and his vision in shaping the film into the classic comedy that it would become.

The supporting cast is also a joy to behold on the silver screen, offering layers to the stars’ performances but more importantly helping to shape and create the world in which the film exists as well as buffering the relationships between the prime characters. As wonderful as they all are, for my money the two standouts are Mary Nash as Tracy’s mother Margaret and Virginia Weidler as Tracy’s sister Dinah. Their interactions on screen are hilarious and the dialogue shared is sidesplitting and rounded out with a naturalness borne of the talent of the actresses delivering their lines. The young Weidler never seems to be out of depth nor dazzled working closely with the primary stars of the film, and proves absolutely delightful on the screen. She steals the scene with her Groucho-inspired moment singing ‘Lydia The Tattooed Lady’ and what follows is hilarious interplay in near-flawless French with Hepburn.

The Philadelphia Story is far from your run-of-the-mill screwball comedy, with its’ satirical core still as fiery as it was in 1940 but avoiding clichés with dollops of farce in the story. But the near fantastical setting of the rich household of the Lords doesn’t mean that there are real life lessons missing in the story. The Lords may be rich but rather than snobbish, they appear as too far removed from the realities of life and they are far from being bad people. As Connor also discovers, the character of a person does not depend on the class they were born into. It becomes a learning curve for all the characters but especially for Tracy, who will finally be honest with herself about who she is, how she views the world and whom she truly loves.

Having a star cast, a top director and a brilliant script does not guarantee a hit film let alone a classic that stands the test of time. Yet The Philadelphia Story has transcended being a hit film and is without doubt a classic and deserves to be acknowledged as such. It would be a win for all concerned. For Hepburn it was a return to form and she was able to shed the ‘box-office poison’ tag attached to her. Cukor enjoyed a top hit after his unceremonious dumping from Gone With The Wind the year before. Stewart would win an Oscar, as would Ogden Stewart and the film would be a top hit for MGM.

But the real winners are classic film fans, who can enjoy the sparkle, wit and brilliance of one of the finest comedies ever made. 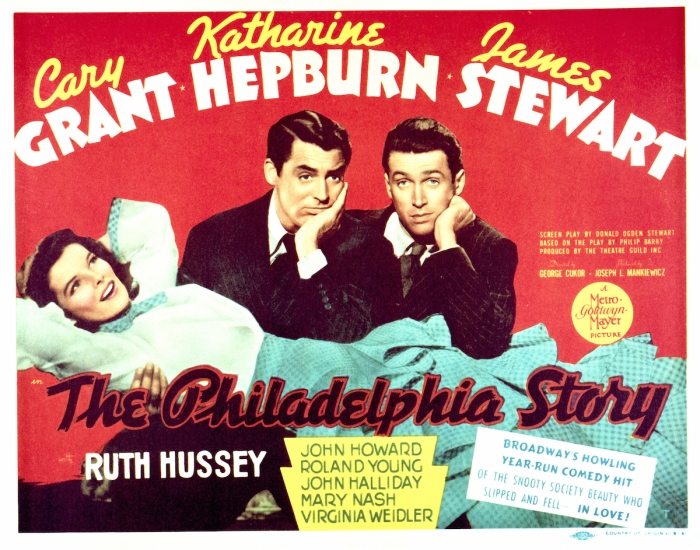 This post is part of the 2018 Greatest Film I’ve Never Seen Blogathon hosted by Moon In Gemini.  Visit her page to see more great articles!

13 thoughts on “The Philadelphia Story (1940): One Of The Greatest Comedies Ever Made”

B Noir Detour
Shades Of Noir

shifting the shape of popular culture

Love to the Max

I love my kids unconditionally. It's not hard.

I just might have something to say about that!

Super Veebs
Queen of the Lot

A blog about classic Hollywood and its stars