Without a doubt, one of the most important and brilliantly shaped exemplars of film noir is the French crime film Rififi (1955). Directed by Jules Dassin and drawn from the Auguste Le Breton’s same-titled novel, Rififi is a lesson in how to build tension, draw on detail to build and shape meaning and reaches deeper tropes in the futility of crime and even the stupidity of those who engage in criminal activity. What also makes Rififi stand out, is its’ cynicism and gritty immersion in the world of the gangster, with violence and brutality the hallmarks of that world.

Despite its’ being described as a French film, its’ director, Jules Dassin, was an American – blacklisted during the McCarthy Era and reviving his career in France. Dassin was a talented auteur who had already made his name with films such as Brute Force (1947), The Naked City (1948) and Night And The City (1950), respected films in the film noir canon. But he was also very adept at comedy with The Canterville Ghost (1944) and would also make another heist film with comedic strains in 1964’s Topkapi. Yet perhaps Rififi is his finest film; one with themes that run deep and cinematic techniques that stand strong in how good cinema is created and shaped, in terms of pacing, rhythm and sensibility to mis-en-scene. If the film were cynical, dark and eviscerating, then it would also reflect the experience of Dassin’s treatment at the hands of HUAC (House Un-American Activities Committee).

The story is a heist film and despite the pre-existence of one my favourite films, Huston’s The Asphalt Jungle (1950), it is easy to see why Rififi is often called the daddy of all heist films. Set in Paris, the plot seems simple enough – a group of crooks aim to pull off the robbery of a jewellery store on the Rue de Rivolli. Yet the film takes the audience further out than what might be anticipated, as we not only are taken through the intricate and painstaking preparations for the job but also the unforgettable robbery scene and the final act where the protagonist faces the reality of the situation and where his code leads him to make some tough decisions. 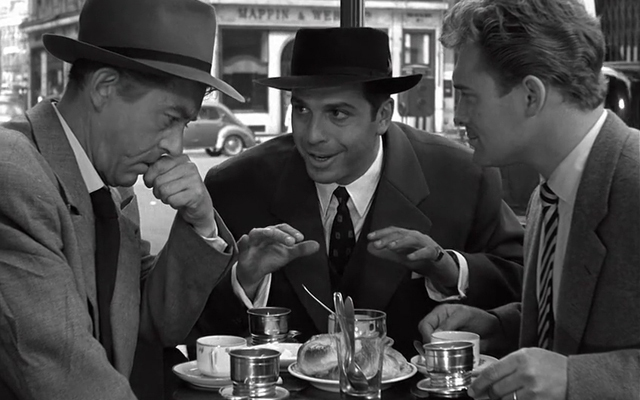 Tony “le Stephanois” (Jean Servais) is a newly released ex-con, who has just completed a five-year term for a fellow gangster named Jo “Le Suédois” (Carl Mohner). Tony is approached by Mario (Robert Manuel), who suggests they rob a jewelry store by crudely smashing the front window and grabbing the jewels. Naturally, Tony declines and seeks out his old girlfriend, Mado (Marie Sabouret). But the reunion turns sour when he discovers Mado has taken up with Grutter (Marcel Lupocivi), a nightclub owner and gangster, whom Tony is not so fond of. In his anger and hurt, he beats her, channeling five years of pent-up frustration. Going against his earlier better judgment, he re-considers Jo and Mario’s offer and agrees to rob the store but declares they will go further and rob the safe. Taking on the safe cracker, Cesar (played by Dassin himself under a pseudonym), the team is complete. The plan put in place is meticulously planned and ingenious in its’ conception. And this reviewer will leave it the audience to find out what the plan is. 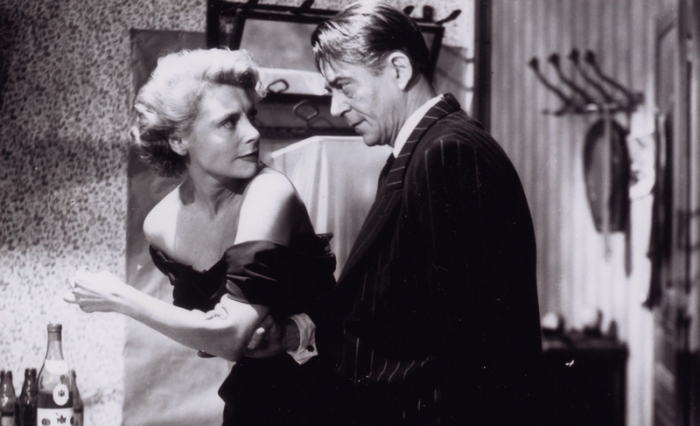 What follows is undoubtedly approximately 30 minutes of the most tense, perfectly constructed cinema ever made. As Roger Ebert noted, ‘the audience hears nothing but taps, breathing, some plaster falling into an umbrella used to catch it, some muffled coughs, and then, after the alarm is disabled, the screech of the drills used to cut into safe’. It is genius on the part of Dassin, who recognized the impact of not having the men talk as they are undertaking the robbery. The term ‘keeping the audience on the edge of their seats’ was certainly invented after viewing this scene. Interestingly enough, as a number of critics have pointed out, the scene becomes the centerpiece of the film, rather than the climax, reflecting Dassin using the heist to tell more about the men carrying out the crime than the crime itself. It is superb manipulation of the audience.

Needless to say, the third act will be played out with Tony facing greater difficulties than he anticipated. There won’t be any spoiler here!

There is certainly a contrast, stylistically, with earlier films of Dassin’s, particularly Brute Force and Naked City, both of which maintain Hollywood’s stylized approach. However, Rififi feels far darker, far more rugged and as Alan Scherstuhl opines in the Village Voice, ‘throbs with his (Dassin’s) anger’. The violence, whilst not visually explicit, is certainly so from an emotional and psychological point of view. As murder is carried out, the camera moves to the face of the perpetrator and not the act of violence itself. Dassin wants us to see what manner of men these gangsters are. Tony and his gang are anti-heroes and the audience is breathless as they conduct the robbery, yet they draw us into the darkness and will not let us go so easily. Tony cuts a sad figure underneath the tough exterior; his sickly coughing a metaphor for a deeper sickness and his ability to carry out violence is also disquieting to say the least.

It would be far too easy to explain the film’s ruggedness on the meager budget. True, Dassin faced limitations but he was no maverick and had already proved that he was a skilled director who had worked on a number of strong productions. Interestingly, Jean Servais, the film’s star, had his own troubles for some time, struggling with alcoholism and seeing his career stumble. Dassin would also use the locales of Paris with sublime naturalness, bringing an even greater realism to the screen. Grim and gritty at times, Dassin also uses those locales to convey Tony’s isolation and desperation, in the streets of Paris. 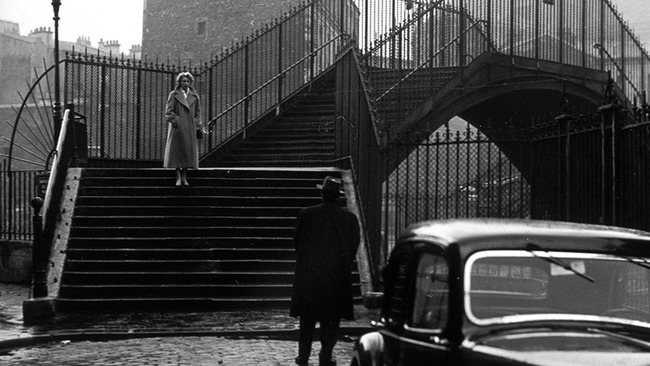 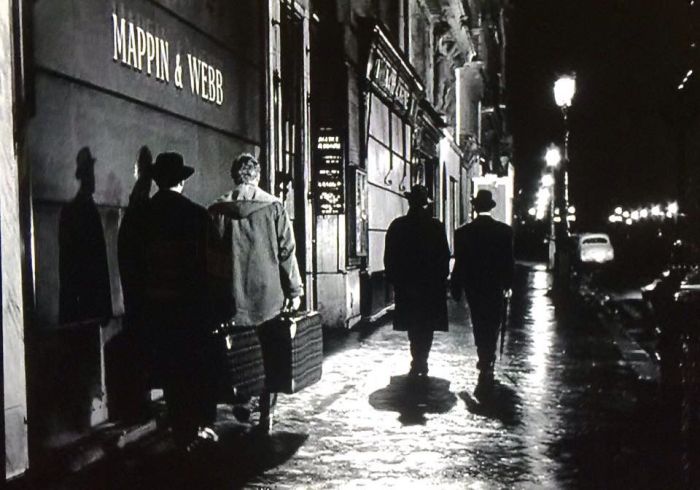 Cole Smithey in 2014 made an interesting observation about the key characters:

‘Rififi’s criminal anti-heroes are made up of outliers who, like Dassin, are struggling to squeak out a living in a foreign land. The gang members have names with an attribution that separates him from the local Parisian culture. Jo le Suedois (or “the Swede”) is the father of Tony’s godson, and the thief Tony went to jail to protect. Tony is referred to as “le Stéphanois,” an allusion to the Saint-Étienne region of eastern central France from which he hails…’

Smithey’s point is a poignant one – Dassin’s directorial vision sees the gangsters ultimately as outsiders to what constitutes a civilized society and walking down different streets with another set of rules in place. Break those rules and death may arrive at your door.

Upon its’ release, Rififi was heralded as a powerful film, remarked upon for its’ realism and tension. Legendary French film critic and director Francois Truffaut famously declared, “out of the worst crime novel I ever read, Jules Dassin has made the best crime film I’ve ever seen”. Contemporary critics seem to generally be in unison with Truffaut, with Sherilyn Connelly stating quite accurately, ‘…if elements of it (the heist film) seem overly familiar now, that’s only because they were done first here, and picked up by every heist film that followed’. Yet Rififi does more than set the tone and standard for the heist film – it also delves deep into the soul of humanity, looking into the aftermath of the heist with focus. The revelations shouldn’t shock us yet they do. The concept of honour amongst thieves is one we have seen time and time again fail to ring true. As one of the prime lessons of film noir, the audience sees the fatalism and futility in the desperate actions of the characters and their humanity is not only misguided but frail and weak as well.

Rififi would basically establish the sub-genre of the heist film and receive great praise on both sides of the Atlantic. Dassin must have felt vindicated as a director and there must have been some satisfaction when he received the award for Best Director at the 1955 Cannes Film Festival.

Chris Cabin in Slant Magazine beautifully described Rififi as being ‘soaked to the bone in dread’, which of course reflects the fatalism that so often permeates film noir. But it also reflects Dassin’s own sensibilities in the face of his own difficulties. The protagonist, Tony, is not unlike Dassin himself – holding to a particular belief and code, only to find that not everyone sees it that way and finding the rug pulled out from under him in the process.

But hey – isn’t that film noir?