Unlike other forms of art, cinema is an art-form, which relies on an incredible diversity of talent and skills, both behind and in front of the camera and before, during and after any shooting occurs. Yet the cinematic vision on the big screen, which is experienced by the audience, is ultimately that of the director. Cinema has seen incredible directors work their craft and perhaps one of the most gifted was David Lean. His sense of cinematography and the human story within an historical context has seen him at the wheel of some of cinema’s greatest masterpieces including The Bridge On The River Kwai (1957) and Lawrence Of Arabia (1962). Yet he brought Dickens to the screen with incredible sensitivity to the textual integrity of both Great Expectations (1946) and Oliver Twist (1948).

Yet Lean is also responsible for some of cinema’s most heart-breaking and forever memorable romantic films, with Brief Encounter (1945) ranking as one of the finest films depicting love unrealised. However, the film, which beautifully depicts this powerful theme, struggling against the historical realities of war and revolution, is 1965’s Dr. Zhivago and the focus of this review.

Drawn from Boris Pasternak’s novel, Dr Zhivago is a story told during the tragedy, turmoil and tumult of one of Russia’s (and perhaps the world’s) most significant turning points in modern history – the lead up to, events and aftermath of the Russian Revolution. Lean frames the narrative by telling the story through retrospect, with the voice of the storyteller belonging to KGB General Yevgraf Zhivago (Alec Guinness), the half-brother of the title character. As he tells the story, the audience follows the life of one Yuri Zhivago (Omar Sharif), from his orphaned boyhood to his becoming a doctor and marrying his childhood sweetheart Tonya (Geraldine Chaplin). But beneath Yuri’s medical coat lies the heart of a poet, which brings him fame and literary respect. Despite an ideal career in front of him with a solid bourgeois family life in place, Zhivago becomes entranced by Lara (Julie Christie), whom he discovers whilst assisting his mentor in treating her mother who has attempted suicide. He also crosses paths for the first time with Komarovsky (Rod Steiger), a political opportunist to whom Lara’s mother (and eventually Lara) will play the role of mistress.

Despite these personal intrigues, Russia is on a path to revolution and the climate of discontent and proletariat zeal is personified by Pasha Antipov (Tom Courtney), Lara’s fiancé. His own political consciousness will take a turn to radicalism when a peaceful protest is brutally dealt with by Tsarist guards. By chance, Zhivago witnesses the protest and its’ aftermath and he even attempts to treat some of the victims, when warned off by the same guards who have committed the atrocity.

But Russia will face greater challenges when it is plunged into World War One and Zhivago goes to the frontline as a doctor to treat the wounded. Fate sees that Lara (now married to Pasha) joins his medical corps and as a nurse works closely with Zhivago. Meanwhile her now-husband Pasha goes missing in action during a battle, although she will initially not be aware of this. Love blooms for them but they remain true to their respective marriages and the circumstances of the war changes when the October Revolution occurs and the Bolsheviks seize power. With Russia no longer involved in the ‘imperialist war’, the two potential lovers must part and return home. Shariff channels the pain of separation as he watches Lara leave and his eyes well with tears.

Zhivago returns to his family and a much-changed Moscow. Despite the Bolsheviks being in power, civil war has broken out and will continue for the next three to four years. The situation is tenuous and the family struggle, to the point where Zhivago has to sneak out at night and break off fence palings for firewood. But he fortuitously meets his half-brother Yevgraf, who warns him that he needs to get out of Moscow, particularly because his poetry is seen as an affront to the Revolution. Zhivago is deeply hurt by this, his poet’s heart racked that the beauty of poetry should be seen in such a way. Along with his father-in-law Alexander (Ralph Richardson) and his family, they decide to go to their familial Gromeko estate in the Urals.

Yevgraf arranges their papers and a long train journey to the estate. The train ride is difficult and Zhivago sees the effects of the civil war on the countryside, witnessing burnt out villages and desperate people. They also hear of a general named Strelnikov, who is spoken of in near mythical tones, who has been routing ‘counter-revolutionaries’ with incredible success and extreme measures. The audience then discovers that Strelnikov is actually Pasha and during the journey, Zhivago will make the same discovery during a tense moment on the journey.

But the family will make it to Gromeko and for a time, they live a safe, happy and quiet life, although the news of the Tsar’s execution shocks the family. But fate will take a crucial turn when Zhivago visits nearby Yuriaten and discovers that Lara is living there with her daughter. The reluctance, which held them back during the war, is forgone and their affair begins.

At this point, this review will leave the reader to discover what follows, in consideration of those who have never experienced Dr Zhivago. And it is certainly a film that is an experience!

Lean shapes, as Kate Muir declared in The UK Times an ‘epic (that) seems too small a word for the sweeping ambition and romance of Dr Zhivago’. The historical context of the story has been criticised, particularly by Bosley Crowther for sentimentalising the Revolution yet the scenes in Moscow afterwards of the over-crowded apartments, people dying of starvation and typhus and the pathetic act of stealing firewood cancels out that criticism for me. With respect, the historical accuracy of the Revolution is not foremost in Lean’s mind (not that there are many glaring inaccuracies) but reflects on the impacts that history has on the individual. More importantly, being a film of romance, it declares that love is founded in all and any circumstances, even during terror and turmoil. The romance between Lara and Zhivago tries to withstand all the obstacles that stand in their way – firstly, propriety and responsibility and afterwards far greater dangers, which will threaten not only their relationship but their lives as well.

Omar Sharif brings the soul of the poet alive in his performance and Julie Christie was never more breathtaking as Lara. The emotion and desperation of their love is beautifully transcribed to the screen. But the other performances are particularly riveting as well. The likes of Alec Guinness as Yevgraf and Ralph Richardson as Alexander in part represent the ‘old guard’ of British stage and screen with their usual finesse. However, Tom Courtney is particularly solid as Pasha/Strelnikov and watching the seismic shift from idealistic revolutionary to a cold, ruthless general is interesting and one asks if more of this character development could have been forthcoming.

However, Rod Steiger almost steals every scene he is in. Not only is Komarovsky political opportunist but a manipulator of the highest order. Steiger brings to the fore an incredible sense of the character, and whilst it is easy to despise his character, it is impossible not only to admire Steiger’s performance. Komarovsky is a fascinating character, whose sense of realism and understanding of life, cannot be refuted. 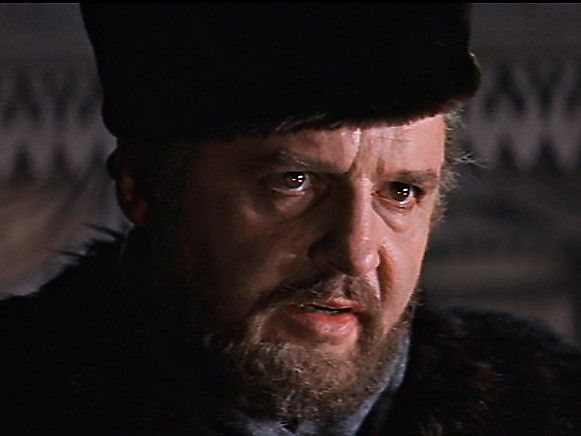 One scene that never fails to arouse my admiration is when the family first board the train. They are confronted with a prisoner (Klaus Kinksi) who declares himself ‘forced labour’. There are almost no words to suggest the power of Kinksi in this moment when he declares himself the ‘only free man’. Kinksi declares ‘long live anarchy’ evoking the pre-revolutionary group of intellectuals and thinkers that were socialist in their hearts but did not support the direction the Bolsheviks took. If ever a cameo appearance dominated a moment in film, then Kinksi achieved it here:

What makes Dr Zhivago an intoxicating film is not only the beautiful photography and grand, sweeping scenarios but the attention to detail to reveal character and unfold the story is also touching – the tree branch tapping at a cold, frosted window during a winter storm, Zhivago watching the silent interchange between Lara and Pasha during a pivotal moment or Zhivago writing his poetry. But the big moments stand strong as well – the mass of deserters leaving the front, the peaceful march that becomes bloody and the vast expanses of the countryside.

Certainly the film score by Maurice Jarre has almost taken on a life of its’ own. The film’s signature piece ‘Lara’s Theme’ is recognised almost anywhere, even if people have never seen the film. It has become a much-loved piece of music but has received criticism for its’ sentimentality, interestingly enough by Omar Sharif himself. Sharif has gone on record stating that he believed the music to be terribly sentimental and he has not been alone in this criticism.

Interestingly enough, Dr Zhivago received mixed reviews upon its’ initial release but would become a huge earner and a major competitor at the Academy Awards. Legendary critics such as Pauline Kael are not fans of the film describing Lean’s direction as ‘primitive’ and Roger Ebert called it ‘soppy’ whilst still noting Lean’s ‘elaborate sets, his infinite patience with nature and climates, and his meticulous art direction…’ Yet of directors such as Martin Scorsese, Steven Spielberg and Stanley Kubrick have noted the huge influence Lean has had on their own work. Spike Lee felt himself channeling Lean when shaping 1992’s Malcolm X, thinking of the very characteristics that Ebert saw as worthy of note.

James Powers in The Hollywood Reporter goes much further: ‘despite the grim and brooding background, Zhivago has a surging buoyant spirit that is unquenchable. Doctor Zhivago is more than a masterful motion picture; it is a life experience’. If I may re-use from an earlier mention I made regarding the film, Dr Zhivago highlights the tragedy of history and how it impacts on people and their lives. But it also reflects the tragedy and beauty of love, where the worst times in history throw people together, allows them to taste the joy of love and then cruelly rips it from them. Lean reaches into our hearts and while the charges of sentimentality may ring true to some degree, it is impossible not to be wholly taken by the experience.

Where Classic Movies Live On
Mike's Take On the Movies .......... Rediscovering Cinema's Past